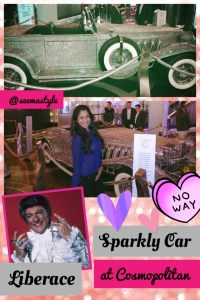 The Cosmopolitan is one of the sparkliest Hotel & Casinos in Las Vegas!  I walked into this amazing sparkly car in the lobby that was designed and driven by Liberace! We would totally be best friends and drive to the Country Club together 🙂 #SoFun

Liberace~ famously known for his concerts, recordings, motion pictures, television, and endorsements that has earned the super star two Emmy Awards, six gold albums and two stars on the Hollywood Walk of Fame… loved and embraced an extravagant lifestyle on and off stage!

Click here to check out my sparkly golf bag that totally matches the sparkly car!

“Liberace also established the Liberace Museum which served as a repository for his cars, costumes and personal effects.  The Liberace Foundation was also established by Liberace and has awarded millions of dollars in scholarships to fledgling performers. In recent years he has been credited by many as being the forerunner of outrageous, flashy stars such as Elton John, Boy George and Lady Gaga as well as bling-bling culture.”

It’s pretty amazing how Las Vegas always has the most flashy products and accessories!  The Cosmopolitan is so creative to showcase one of Liberace’s most studded and flashy cars from back in the 60’s, so amazing!

Make sure you check out this fabulous car at the Cosmopolitan this week!