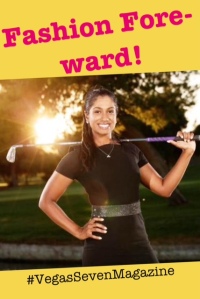 Here is a golf and fashion article from a few years back from Vegas Seven Magazine!

I had a blast with this photo shoot and talking about golf with the Vegas Seven Team!

Even from her earliest swings, Seema Sadekar never dressed in traditional golf attire. At 11, she attempted to play a round in cut-off jeans and a yellow tank top but was denied access to the course. Disappointed but still interested in the game, she learned to tolerate the boring polo shirts and khaki shorts her father made her wear.

Now a professional on the Futures Tour, Sadekar, 25, is not only competing for a spot on the LPGA Tour, she’s moving fashion forward on the course. The former UNLV golfer is easy to spot during play with her gold leather golf bag, sparkly club covers and form-fitting tops and sequined skirts.

“I’ve always been into apparel,” she says. “I like to keep it cute and feminine and just stand out and be different out on the golf course. We don’t have many options when it comes to golf clothing. When you’re out there a lot of the girls are wearing the same outfits, and I never wanted to do that. I branch out and shop at random stores that people would buy clothes to go out in, and I wear them on the golf course.”

Sadekar and her older sister, Nisha, a former golfer on the Futures Tour, have combined their loves to launch Las Vegas-based Minx Golf, which assists new and existing brands in developing golf-related fashions and accessories.

“We’re trying to make golf attire a little more transitional,” Nisha says. “We want to create outfits that you can run errands in, play a couple holes and then go meet the ladies for a drink, all with a simple change of shoes.”

The sisters left their native Toronto in their teens to hone their golf game at the IMG Leadbetter Golf Academy in Bradenton, Fla., where Seema earned AJGA All-America honorable mention honors. When it was time for her to select a university upon graduation in 2003, she chose UNLV and its blossoming women’s golf program, which debuted just two years earlier.

Sadekar wasted no time making her presence felt at UNLV as a freshman, helping to redesign the Rebels’ look on the course. The old uniforms were “these pleated khakis and tapered ankle black pants,” she says. “I was like, ‘If we’re going to be UNLV, we are going to be cool and wear short skirts and cool outfits.’”

At UNLV, Sadekar was part of three straight Mountain West Conference championship teams, was named All-MWC in 2005-06 and set the conference scoring record with a round of 66 at the 2004 MWC Championships.

After lettering for four years at UNLV, Sadekar turned pro in 2008 and joined the Canadian Women’s Tour, where she became the leading money winner that year.

It was early into her pro career that Sadekar sought to create a look that would distinguish her during play. Searching the Internet, she found inspiration in a Christian Dior golf bag made of brown and gold leather but realized that there was no real fashion presence in golf.

“I thought, let’s design our own golf bags instead of carrying the same bag as everyone else,” Sadekar says. “Your golf bag is like a little purse; you gotta make it your own.” Nisha, having ended her pro golf career in 2004, shared her sister’s aspirations. “We took golf bags to the next level and turned them into accessories. We feel just like a purse or any other fashion move, it should represent you.”

Besides being involved with Minx Golf, Seema is also an integral part of another Las Vegas-based venture, Play Golf Designs, started by Nisha. The company stages golf outings for high-rollers, corporations and charitable organizations, and provides professional female golfers for each event.

Seema’s attractiveness and fashion sense landed her on Sports Illustrated’s list of the world’s hottest athletes, and she was a participant this year in the Golf Channel’s Big Break reality TV series. But despite all her outside interests, she remains focused on reaching her ultimate goal of earning her LPGA Tour card.

“This year has been very overwhelming,” she says. “There’s been a lot going on in my life, but I don’t think that takes away from my biggest focus which is going out there and winning.”